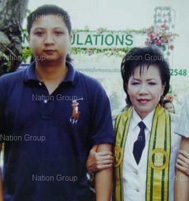 The Cambodian side contacted Thai embassy in Phnom Penh on Tuesday morning, confirming that the envoy; Chalotorn Paowiboon, can meet Siwarak Chutipong at the prison. Later the envoy then met Siwarak and contacted his mother; Simaluck Na Nakhon Panom, allowing him to talk to his mother. Simaluck quoted her son as saying that he is ok.

Foreign Minister Kasit Piromya said on Friday that Cambodia’s arrest of a Thai engineer on spying charges is nothing more than intimidation with the intention to defame Thailand. Cambodia has charged Siwarak Chothipong, an engineer of Cambodia Air Traffic Services, for “stealing” the flight information of ex-Thai PM Thaksin Shinawatra and Cambodia’s PM Hun Sen.

Cambodian prosecutors alleged that Siwarak stole the information and sent it to Thai embassy’s first secretary Kamrob Palawatwichai. Cambodia on Thursday expelled Kamrob following the accusation that he had executed work in contradiction to his position. He was ordered to leave the country within 48 hours. “It is clearly intimidation with intent to defame Thailand by Cambodia,” said Kasit, who cut short his participation in ministerial preparatory meetings for the Apec Summit in Singapore.

He accused Thaksin of being the major cause of all the problems Thailand having with Cambodia. He said he had assigned officials of Thai embassy in Phnom Penh to assist and provide legal advice to Siwarak. Cambodia’s appointment of Thaksin as the adviser to Hun Sen and his government has seen the start of the current diplomatic rows between the neighbouring countries. Both have recalled their ambassadors and the first secretaries. Thailand has downgraded relations and reviewed cooperation with and loans given to Cambodia.

Thai and Cambodian diplomatic flares again Thursday after Cambodia expels a first secretary of Thai embassy in Phnom Penh. Cambodia’s Foreign Ministry ordered one of the Thai Embassy’s the first secretaries to leave the country within 48 hours, starting from 5pm.

Learning of the order, the Thai side countered by expelling the first secretary of the Cambodian Embassy in Bangkok and ordering him to leave the country within 48 hours, starting from 5pm, said Thai government spokesman Panithan Wattanayakorn.

The review is a further move of his government to protest Cambodia’s appointment of convicted ex-Thai PM Thaksin Shinawatra as economic adviser to Khmer PM Hun Sen and his government.

Deputy Finance Minister Pruetichai Damrongrat told reporters that the No 68 road will link Chong Chom checkpoint in Surin province to Cambodia. Meanwhile Deputy Prime Minister Suthep Thaugsuban said that the cabinet will not consider an financial assistance of Bt31 million to Cambodia in its meeting next week.

The proposal is put on hold as a measure of Thailand to protest Cambodia. In a separate interview, Abhisit said he was considering further measures against Cambodia, but vowed that his government would not seal off checkpoints on the border and said that the rift with Phnom Penh would not lead to violence.

“I don’t want the situation going out of control,” he said.

The Cambodian government on Thursday evening announced to temporarily call back its Ambassador to Thailand, a move came shortly after Thai government’s recall of its ambassador to Cambodia.

The decision was announced at 8:30 pm local time by Sok An, minister of council of ministers, at a hastily arranged press conference.”The move we took is a response to Thai’s recall of its Ambassador to Cambodia,” Sok An said.”That we appointed Thaksin as our government’s adviser is Cambodia’s internal affairs and conforms to international practice.

“Earlier Thursday, the Thai government decided to recall its Ambassador to Cambodia to protest against the appointment of the ousted former Thai Prime Minister Thaksin Shinawatra as adviser of Cambodian Prime Minister Hun Sen and the government.

The Thai government said that it is ready to demand of revising bilateral agreements, which have been agreed by the two countries.

The Thai government’s movement is based on diplomatic principle, which does not intend to any violence to occur between the two neighboring countries, Thai Foreign Ministry said.

Thailand on Thursday recalled its ambassador to Phnom Penh in protest at Cambodia’s appointment of convicted ex-Thai PM Thaksin Shinawatra as economic adviser to Cambodia’s Prime Minister Hun Sen and his government.

The Thai government will demand reviews of bilateral agreements and commitments signed between Thailand and Cambodia by both present and past governments, according to the statement issued on Thursday.

Thai Ambassador to Phnom Penh Prasas Prasavinitchai is scheduled to arrive in Bangkok at 3pm.

Hun Sen announced upon his arrival in Thailand in October to attend the Asean Summit that he had offered Thaksin, who he regards as a friend, a residence and a job as his economic adviser.

The Thai Foreign Ministry’s decision to recall the ambassador is the strongest protest made in years.

The statement also mentioned that the ongoing cooperation between the two countries would be put on hold for the time being.

Foreign Minister’s secretary Chavanont Intarakomalsut said the appointment of Thaksin as Hun Sen’s adviser was considered as intervening in the Thai justice system.

“The appointment of Thaksin as the adviser to Cambodian Prime Minister Hun Sen is regarded as an intervention in Thailand’s internal affairs and an insult to the Thai justice system,” he said in a press conference.

The appointment clearly showed that the Khmer premier failed to distinguish between his personal interests and the mutual interests of the two countries, he said.

“It’s an honour to be Cambodia’s advisor : Thaksin

“I would like to thank (Cambodia’s Prime Minister)’s Hun Sen for appointing me as his economic adviser,” Thaksin said in his twitter (Thaksinlive).

Cambodia has already sent him a copy of the appointment that signed by Cambodia’s King Norodom Sihamoni.

However he said he would enjoy more doing the job for Thai people.

King Sihamoni signed the Royal Decree of the appointment of Thaksin Shinawatra on Oct 27. The appointment was made in accordance with the country’s constitutions and at the request of Prime Minister Hun Sen.

As Hun Sen arrived in Hua Hin to attend Asean Summit in October, he declared “Thaksin can stay in Cambodia as a guest of Cambodia. He can also be my adviser on the economy”.

The Cambodian leader repeated an earlier invitation to Thaksin to stay in Cambodia and rejected Thai claims that Phnom Penh would have to extradite the tycoon.

“Our concern is for humanitarian reasons, it is friends helping friends. The internal affairs of Thailand would be left for Thai people to resolve, I am not interfering,” said Hun Sen.

Cambodia also issued a statement, saying it will not extradite Thaksin at a request from Thailand if he comes and stays in Cambodia. Meanwhile, it said that the Royal Government will continue its policy of having friendly relations with Thailand.

The appointment came almost two weeks after Hun Sen riled Thailand by offering safe haven and the job of economic adviser to Thaksin, upon arrival in Thailand to attend Asean Summit.

Cambodian PM did not offer Thaksin a home

“He didn’t say that,” Khieu Kanharith said. “Some people have said we would allow Thaksin to have a permanent home in Cambodia – it’s not true.”

He claimed Hun Sen had been misquoted by the media.

This was the latest twist of the talk between Hun Sen and Gen Chavalit Yongchaiyudh who recently visited Phnom Penh as chief advisor of Pheu Thai party.

Arriving in Bangkok after a one-day visit to Phnom Penh on Wednesday, Chavalit told reporters that Hun Sen offered to build a home for Thaksin who was runaway from a two-year jail term on charge of abuse of power and corruption.

Chavalit quoted Hun Sen as telling him during the talk, “We have been great friends since Thaksin was businessman and the relationship has remained the same since he entered politics.”

“Though I’m not Thai, I’m hurt by what has happened to him. My wife even cried on knowing about it and has an idea to build a home for Thaksin to come and stay honourably.”

Meanwhile Phnom Penh-based Rasmei Kampuchea newspaper quoted Hun Sen as telling Khmer reporters, “I consider Thakshin as my eternal friend. Cambodia will welcome him to stay here for anytime. I make the house available for him at any time if he decides to visit Cambodia. I also talked with Chavalit about the cooperation between Puea Thai Party and Cambodian People’s Party.”

The incident marked the second time in two months that Thai troops have been accused of killing Cambodians along the border in north-western Cambodia.

The Phnom Penh Post newspaper cited the governor of the provincial capital of Oddar Meanchey province as saying the victim, Sim Bun Chhim, 25, was crossing the border with two other men Monday night when Thai soldiers opened fire. The other men escaped, but Sim Bun Chhim was seriously injured and died on his way to hospital.

Thon Nol, the governor of Samrong, condemned the act.

“They crossed the border illegally, but (Thai troops) shot them like animals,” Thon Nol told the newspaper. “They should have arrested them and sent them back to the Cambodian authorities.”

The Foreign Affairs Ministry was awaiting a report from local authorities before deciding on any course of action, spokesman Koy Kuong said Wednesday.

Last month, a Cambodian teenager was reportedly tied to an ox cart and burned alive by Thai troops after being caught logging illegally in Thailand.

The Thai government had said 16-year-old Yon Rith was already dead from gunshot wounds when troops burned his body.

The ministry spokesman said Phnom Penh had received a note from the Thai government refuting the allegation. Cambodian officials were still investigating the teenager’s death.

“The note says that the Thai side agrees to cooperate with Cambodia to bring the offenders to justice but asked Cambodia to provide more evidence,” Koy Koung said. “I don’t know how long that (investigation) will take.”

Cambodia and Thailand have had a tense and long-running dispute over their 804-kilometre-long border. Violence has flared on occasion between troops on both sides, most recently in the area around the 11th-century Preah Vihear temple on Cambodia’s northern border.